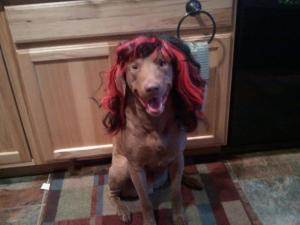 Today was the WI pheasant hunt opener. We took Gambler and Glory. Gamblers paw has healed up nicely since starting on his antibiotics for his puncture in his pad, so we took him with. My nephew Joey went with us, he is 15.5 yrs old and loves to hunt. I never took him pheasant hunting before so this was a great day spending time with him. Joey and I went off in a field with Gambler while John and Glory went behind us in another field. Gambler worked good and I explained to Joey how to watch the dog and when they make sharp turns and start tracking and their tail is just a wagging to keep up with him because he is on something. Gambler was on a scent and tracked it for a ways and then nothing. We hit the end of the field near the woods and then met up with John and Glory. We came through the woods and then both Gambler and Glory flushed up a pheasant but it was in front of John so he shot. Glory retrieved the bird to John, both dogs were super excited after that. We hunted a bit more to try and get Joey a bird but we had no success. Next time!

Today I got invited to go duck hunting with Justin and Riley. Riley is one of my puppies from Nellie & Tiny’s 09 litter. Riley had a rough start in life as when she was 3 days old she broke her little hip. I didn’t know anything was wrong until she started walking at 3 weeks. When I looked back at the videos I took I then noticed a problem when she was crawling at 3 days old. Poor girl, she had physical therapy until 12 weeks of age and it was a miracle that her hip joined her femur again and looked perfect. I couldn’t sell her as she had a defect so she went to live with my friend Justin who also has a guide business All Seasons Adventures near our home so I knew she was in a good home that would spoil her with tons of ducks.

Today was overcast and cool, the ducks weren’t flying like they should have. The dogs (Riley and Gambler only got 4 ducks and 1 goose). It was a fun time nonetheless. Whenever your hunting with your best fur friend it is a good day.

Unfortunately Gambler got hurt. Sometime in the beginning of the hunt when he went out for a retrieve and came back into the boat he stepped on something that punctured the bottom of his paw. He was holding it up then the swelling started in. He is feeling a wee bit sorry for himself limping around on three legs. Tomorrow he will go to work with me to get some medication for his paw. Hopefully he will heal up soon so he can go out again on a hunt. 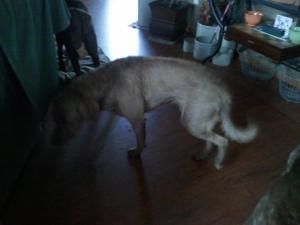 Feeling sorry for myself

Gamblers mom: HRCH HOPE SPRINGS DOWRY MH ** is listed in the HRC Top 10 Producing Female Chessies for the year. This is recognition for the females who have produced litters where offsprings have received HRC titles. This is yearly July to July. Gamblers Dad: HRCH SAND SPRING NORM OF CAROWAY MH was listed in the previous HRC magazine. He was in the Top 10 Producing Male Chessies. 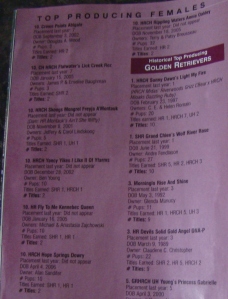 Sunday was a very rainy day. I am a fair weather hunter so I didn’t want to go hunting ducks even know ducks love water I don’t! John said he was going to go and take Gambler with him so we loaded up the canoe and I drove them around the block to the river where he could put his canoe in and float down the river to the other road where I could pick him up. This would be John’s first duck hunt since he has been back from Canada and also Gamblers with John. Have way down the river I get a phone call from John telling me he wished he had the video camera or the regular camera as Gambler made him proud. He said a group of mallards got up, he shot 3 times and got 4 birds. He released Gambler and away he went to retrieve the birds. He grabbed one bird and was fooling around and not coming back when called so he got a nick on the collar, he then came swimming back and passed another duck on the way and scooped that one up in his mouth also so now he is swimming back with 2 ducks in his mouth. He jumps into the canoe and John takes the birds from him and notices that the hen and drake each had a band on their legs. How cool is that he thought! He then sent Gambler back for the other 2 birds. What a great day of hunting, it’s quite a honor to get one banded bird but to get 2 with one retrieve will probably never happen again. 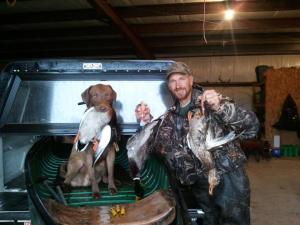 A little information about bird bands.

Bird banding is important for studying the movement, survival and behavior of birds. About 60 million birds representing hundreds of species have been banded in North America since 1904. About 4 million bands have been recovered and reported.

The North American Bird Banding Program is under the general direction of the U.S. Geological Survey and the Canadian Wildlife Service. Cooperators include the U.S. Fish and Wildlife Service, Mexico’s National Commission for the Knowlege and Use of Biodiversity and Secretary of the Environment and Natural Resources; other federal, state and provincial conservation agencies; universities; amateur ornithologists; bird observatories; nature centers; nongovernmental organizations such as Ducks Unlimited and the National Audubon Society; environmental consulting firms and other private sector businesses. However, the most important partner in this cooperative venture is you, the person who voluntarily reported a recovered band. Thank you for your help.

Please Report Bands at
www.reportband.gov
or
call 1-800-327-BAND
This is what was printed on one of the certificates that was awarded with the band.

Thanks goes out to Misty Shores Chesapeakes for giving Sand Spring The Reader Appreciation award, One Lovely Blog Award, The Addictive Blog Award and Wonderful Team Member Readership Award! I’m new to blogging and following other blogs, I love to read about what others are up to with their furry friends. Thanks again Misty Shores Chesapeakes, I would be happy to pass these awards on to the other great bloggers out there.

Here are the award rules:

1. Thank the blogger who nominated you and link back to their blog.

2. Award Your Top 6 Bloggers (who have commented the most)

3. Be Thankful (Appreciative & Grateful too)

4. You cannot award someone who has already been awarded. You cannot give the award back to me.

6. If you do not want to pass on this award, that is okay too. Just ADMIRE It!

I’m going to break the rules on receiving awards as I haven’t been blogging long and don’t have a big following or follow that many blogs so I will probably be giving this award out to my blogging friends who already got it and I might not be able to pass it on to my 6 top bloggers (don’t think I have that many 😦   ).

7 Intresting things about me.

1. I don’t much like chocolate but will eat on occasion.

4. I am traveling overseas for the first time in a few weeks to the UK.

5. I ran my first AKC Senior hunt test this past fall and passed with Gambler one time.

6. I showed Gambler and Glory in UKC conformation and got their titles, never did that before.

7. My favorite colors are orange and lime green.

These are the blogs I would like to pass this award onto.

Here are the photo’s from the photo shoot I had with the gang at the end of Sept. Patti from Windy Point Photography did a fabulous job. We had a blast. Enjoy!

My favorite puppy picture of Nellie they day we brought her home.

My dearest Nellie,
Today you are 8 yrs old and I have loved you each and every day of those 8 yrs. You were a result of Norman and I thank him everyday also for giving me you. We were going to pick a male but there was only one male in the litter and you won our hearts. You were such a great puppy never had any problems with you. In the above picture you were named nurse nellie as your daddy had surgery on his leg 3 days before we brought you home. You were so gental with him, you still are now that he is 12 you are carefull of him. We only had one major scare with you through out your 8 yrs and that was when you were 1.5 yrs old and you decided to jump off the loft level of our new house we were building. You broke your hip and needed surgery to take out the broken piece and suture your hip back in the socket. You healed up fast and has never had a problem with it since. You have given me 3 very special litters of puppies and have made 17 people very happy as you have given them a piece of you with there puppy, including me. You saved the best for last and gave me Glory to follow in your footsteps and she has some pretty big footsteps to fill as you are one heck of a dog, family member, hunting partner, friend! You may only have your SH title but you are a MH out in the field. Hope you enjoyed your Sasakatchewan trip as I missed you each day you were gone and next year I will be there to hunt with you again there. Welcome home little turd!

A good time was had by all.

10/7/12 was Nellie’s 8th Birthday. She just returned home from a week hunting in Saskatchewan and she got quite the home-coming with a Birthday cake. Misty Shore’s Chesapeakes was nice enough to share their Birthday blog with us so we used the same recipe they used since her dogs loved it. Take a moment to hop on over to their blog and take a peak at what their chesapeakes are up to. Thank you Misty Shore’s for letting me use your recipe, it was easy to cook and my gang loved it also.

Here is the recipe for those of you who would like to try it also for upcoming occasions.

The supplies and recipe.

Of course Gambler stole the bowl to lick. 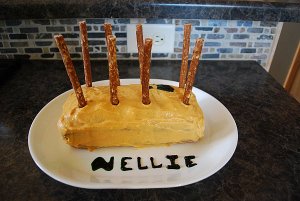 The frosting was a mixture of canned pumkin and plain yogurt. 8 rawhide chewies as the candles.

Right after Nellie got home she got to enjoy her Birthday cake, she had to share with the gang and everyone LOVED it. 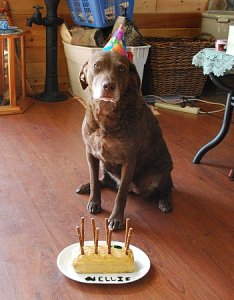 Glory off by herself.