HRCH SAND SPRING NORM OF CAROWAY MH WDQ call name “Norman” started his career in AKC hunt test trials on May 25, 2001. He was only six months old (the youngest in his class) when he competed and passed! Norman received the first of four legs towards his JH title. During the summer of 2001 Norman finished his obedience classes and competed in four more JH tests. September 2, 2001, in Madison, WI, Norman received his Junior Hunter title at the age of 10 months! In the fall after the hunt test competitions Norman hunted upland game and waterfowl with John and I. On April 4, 2004 Norman was sent to Mike Lambrecht of Woodland Bay Chesapeake’s, a professional trainer, and after only eleven weeks, he passed his first Senior Hunt test. He was very quick to catch on and loved to train and compete. That summer Norman ran and passed four of five Senior Hunt tests. He was awarded his title at the end of August, 2004 again in Madison, WI. At this competition Norman landed his last blind retrieve without any help from Mike. What a way to end his Senior Hunter work! Norman went on to start competing for his Master Hunter title. In the summer of 2005 Norman passed two Master Hunter tests, as well as two UKC finished tests. Norman went back to Mike in 2006 for more training and passed two more Master Hunter tests.  He also competed in UKC hunt test events and received his HR title as well as passing two finished events for a total of 75 out of 100 points needed for UKC HRCH title. Norman has his American Chesapeake Club, Working Dog Qualified title. On May 27th 2007 Norman completed his Master Hunter title. At the end of the UKC HRC 2007 hunt test season Norman has a total of 90 points towards his UKC finished title. On April 27th 2008 Norman competed and passed his last UKC finish test for his HRCH title.

When Norman is not in training or competing in hunt tests he is running around on our 70 acre farm with our other Chesapeake ( which is his daughter). He has his own pen of ducks and pheasants to play with when we want to get some training in. Norman has proven that he is able to adapt to unique situations, from being at our house one day to staying at the trainers the next, riding on the back of our 4-wheeler through the marsh, sitting in the canoe when duck hunting and riding in the front of the boat while hunting on the lakes. When Norman isn’t hunting or playing outside he is inside curling up on our bed for a good nights rest so he can get up and do it all over again! Norman has many great qualities, besides coming from show and field trial lines and proving himself with his own titles to being a loving family dog and faithful companion. This is why we decided to start SAND SPRING CHESAPEAKES and use him as a stud dog to contribute to the wonderful breed of Chesapeake Bay Retrievers.

We are very happy to announce that Norman’s picture was chosen as the Chesapeake Bay Retriever profile picture on Westminster Kennel Club website under about dogs link.

Norman’s friend Oz The Terrier wrote a Limerick for Norman just after he was diagnoised with Osteosarcoma in June 2013 you can read his Limerick on his page by clicking here. 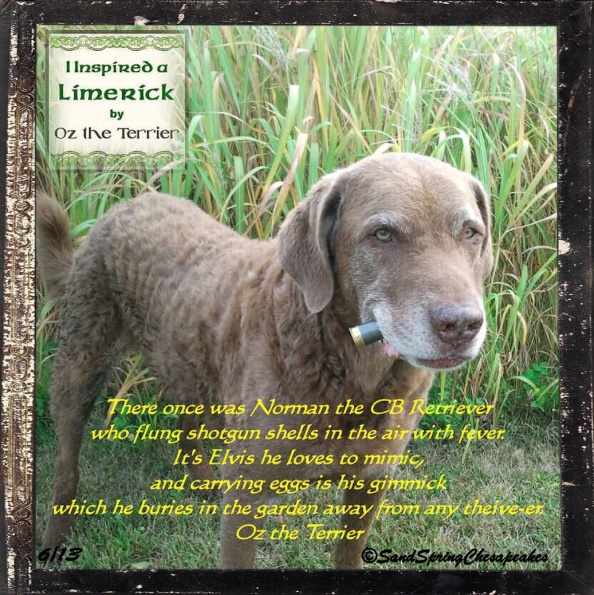 One thought on “Norman”