Today we join our friends at the 2 Brown Dawgs blog for This ‘N That Thursday.
“This ‘N That Thursday is for those times when you want to post about unrelated topics or each topic isn’t quite long enough to make up a whole post. It can be anything you want, so feel free to grab the button and join us!”
The Duck/Chicken Pen
I keep a few chickens around for fresh eggs. The lay during the warm weather but when it gets cold out they stop laying. Some say I could put a light on as they lay more when the days are longer and with a light on you can trick them into thinking the days are longer. I choose not to do that as I only have a few so I would maybe get one egg a day and it isn’t work the extra electricity. The chickens have a giant enclosed outside pen with a chicken house attached so they can get out of the weather. The chickens do have to share their space with the Mallard ducks. Each year we either start out in the spring by purchasing day old Mallard chicks and raise them up or we keep a few ducks over from the previous year and collect the eggs from the hens come spring time and incubate them and hatch out our own day old. Last year we had so many ducks left over after training we kept them threw the winter. We will then collect their eggs and incubate them instead of purchasing them. We sell most of the ducks to our trainer for training birds. We will use a few on our own dogs for training. Keeping ducks is a very messy ordeal so many don’t want to raise them. We have a big enough area where we can keep them and I enjoy watching and raising them so I don’t mind the mess. The dogs enjoy the ducks too, Norman and Nellie have been raised with them for so many years they are used to them and know the ducks in the pen are off limit. When I go into feed them they will sneek threw the door behind me and will wonder around the pen looking for nibbles of left over food. They leave the ducks alone and the ducks are not scared of them. Gambler and Glory on the other hand are not allowed in the pen yet! They chase them and make the ducks fly around the pen and they get them all riled up. Maybe in a few years they will be able to be in there at feeding time but not now.
Here are some pictures of my birds. 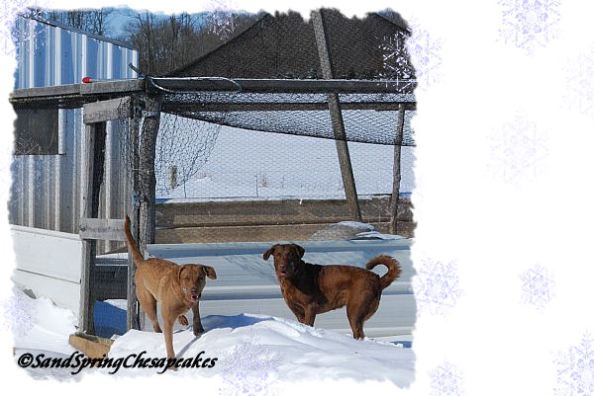 I need booties for my big orange feet. 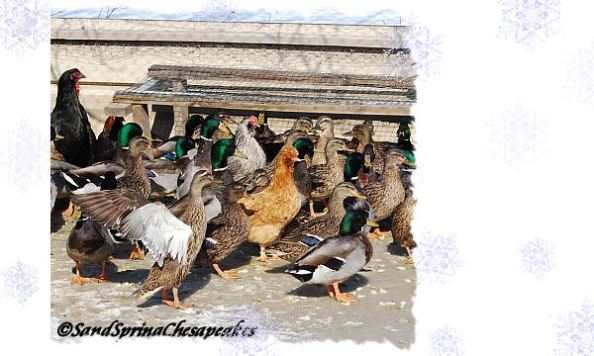 Gambler is one driven dog when it comes to something he likes (toys & training). He loves to be out doing something, he is always on the go. When we are done playing or training we need to put the items in use up high or behind closed doors as he will find a way to get what he wants. Yesterday his football was up on top of Nellie’s kennel high out of reach, so we thought. When I was in doing laundry I see Gambler first jump into Nellie’s kennel and stick his nose up threw the crate holes trying to get his football. Since he couldn’t get it that way he then jumped out of Nellie’s kennel and jumped on to Glory’s kennel then jumped on top of Nellie’s kennel and grabbed his football. He did this a couple of times while I was getting the camera to take the picture. He has no fear of highs, all he cares about is if he got his toy. John did come in and lift him off the crate so he didn’t hurt himself. He is such a resourceful  dog that may get him in trouble one day.

John does trapping on the side. Gambler loves to see all the critters John brings home. This time a friend of ours brought over this beaver for John to take care of. The beaver weighed 65# and Gambler tried with all his might to pick it up. He was able to drag it around for a bit but couldn’t pick it up as it was almost as big as him. Gambler weighs 70#. 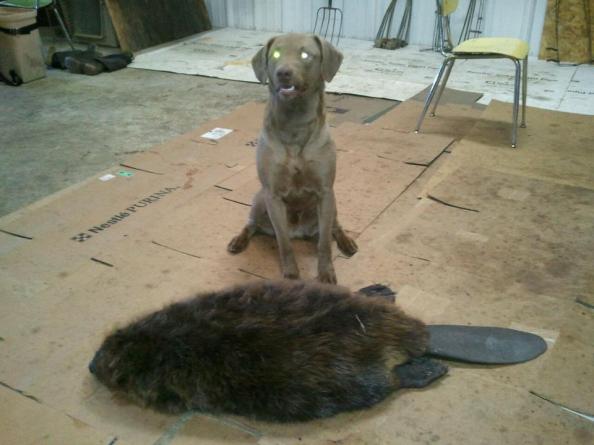 John skins the critters he gets then he fleshes them and drys them. He then sells the hides to a fur buyer. 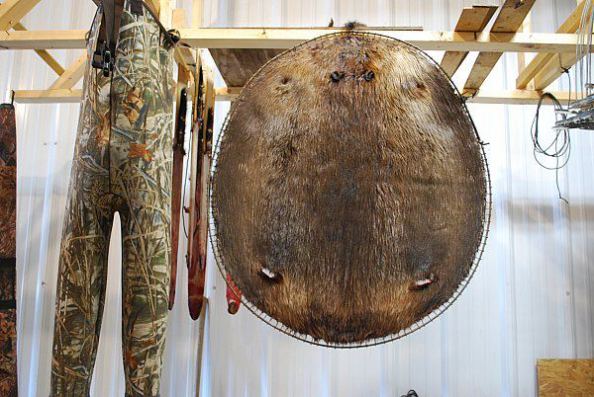 That was it for yesterdays adventures. Have a great day!