Solvit Bag Takes A Lickin Cuz Of The Jones Chews

As you may know I work out of town on Monday and Tuesdays. I come home Tuesday nights and Wednesdays are one of my day’s off. Now after the gang has been kenneled for 2 days while we’re away working by Wednesday Gambler is wound tight (as most of my mischief stuff happens on Wednesday’s) he also knows Wednesday’s are for hunt test training. I was having one of those mornings…..when I had so much going on in my head I forgot what I was doing and once again  the mischief happened.

I was packing up my stuff to go train, talking on the phone walked out the house with all my bags (all four of them) when I realized I needed to go back in the house and draw a picture of last weekend test so I can so the training group. I set my 4 bags down on the high porch chairs and table that are on my deck and went back inside to draw the picture. I was still talking on the phone, drawing the picture and headed back outside. I walked across the lawn and saw……….guess who……..standing over my Solvit bag with stuff pulled out of it! My friend proceeded to listen to me scream at GAMBLER!

Stuff pulled out through the side opening.

Now what might make a dog go stark raving mad and pull this heavy bag off of the table carry it to the middle of the lawn and rip stuff out of it to get to the good stuff…..the good stuff being Jones Natural Chews knee caps! Yup that’s right my gang loves Jones Knee Caps! Gambler loves them so much he thought he should help himself since I was tied up doing 5 things at once.

Now I must say, that Solvit bag is built Gambler tough on the outside. I was really cringing when I saw what he did, I thought he wrecked my nice bag. At first inspection it looked like nothing happened to it. I then opened it up and there was one little puncture hole in the lining of the flap and he tore the inside liner a bit. It could of been much worse and those things I can fit. The outside is made of some really rugged material.

The rip in the lining.

I took a broom to the outside of the bag and got all the grass off, I had to get all the grass off my camera and the other stuff that was in the bag. Have a slight repair to do but all in all this is one Gambler tough bag!

Thanks Solvit for making a rugged bag and thank you Jones for making tasty treats.

On a side note….poor Gambler didn’t get a knee cap that day nor has he gotten one yet. And like a dummy the knee caps are still in that bag and the bag is sitting on a chair in the house. Gambler did this all before he was a Canine Good Citizen so now that he passed his test I recon he won’t be getting into anymore mischief…..what do you all think? Should I not hold my breath??????

I’m a Canine Good Citizen now, I don’t do mischief. 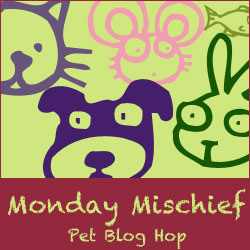 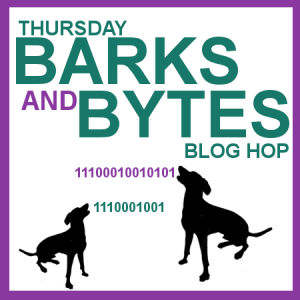 The co-hosts for Barks And Bytes are Linda from 2browndawgs and Jodi from Heart Like A Dog.

I got a surprise email the other day from none other than The Great And Powerful Oz, I was super excited to see that I won a give away he was doing a few weeks ago. His post was on HomeAway™ Travel Organizer Kit by Solvit you can read the whole post here describing this really cool bag. I so wanted to win this bag. I am a bag nut, you name it….computer, purse, shopping I have it. What I don’t have is a really cool dog bag until now. I just went through my backpacks and put Gambler and Glory’s therapy stuff into one of my old leather backpacks that I used to use as a purse. It really wasn’t cutting the mustard. I think this HomeAway™ Travel Organizer Kit by Solvit is just the right bag I need for our therapy visits and our upcoming hunt tests. 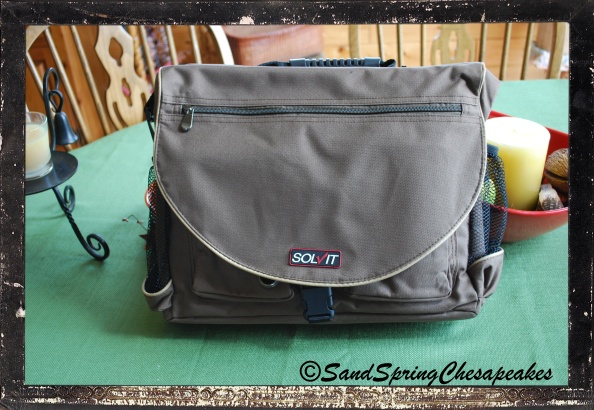 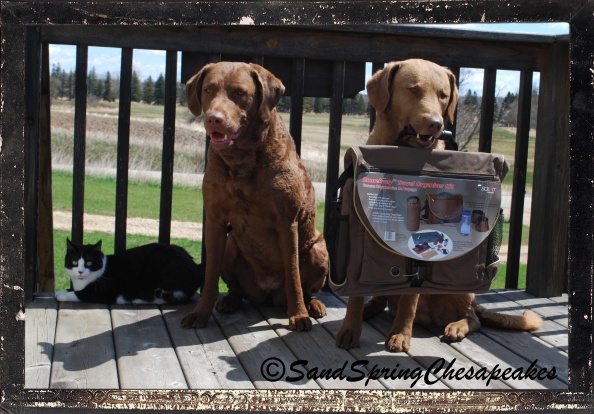 This bag will fit all your travel items for a dog or a cat. 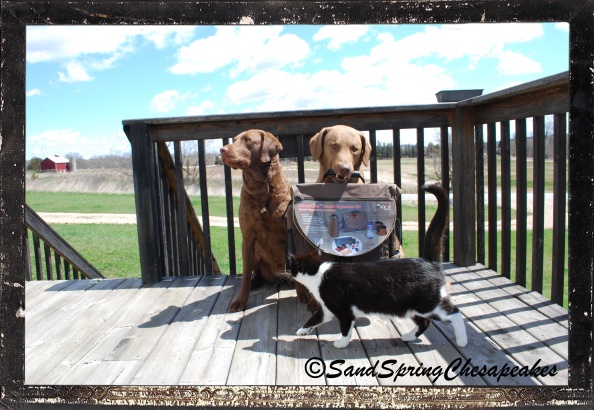 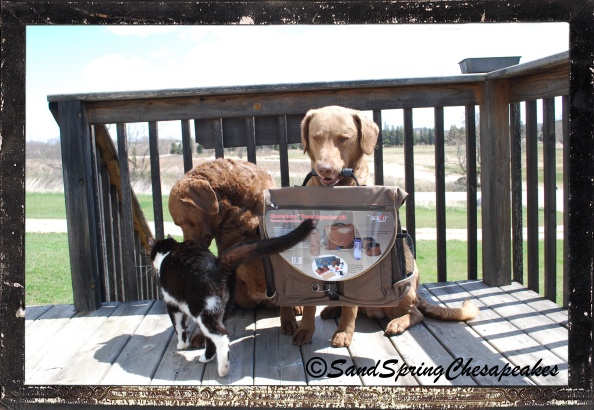 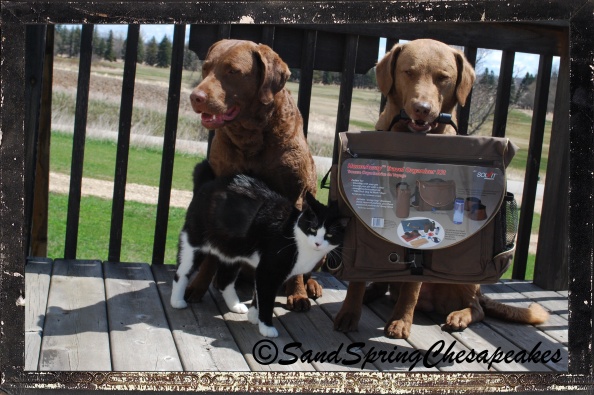 This looks like a really cool bag can I have it? 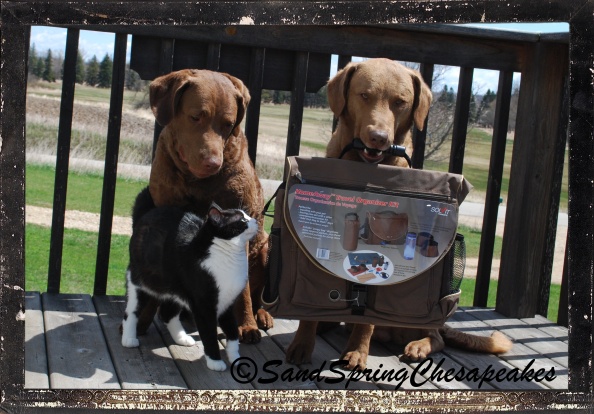 Step away from the bag kitty.

This was one of the best give away’s. I can’t wait to put all my stuff into it.

Speaking of give away’s. Gambler invites you to stop back next Tuesday on May 11th for his 3rd Birthday. He will be giving 3 sets of something really cool his mom makes away. 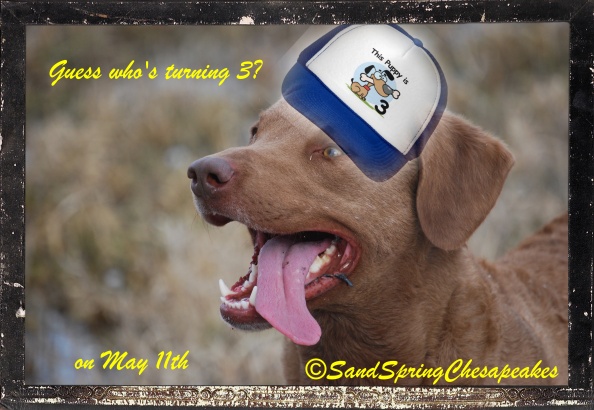 If you didn’t get a chance to see MK debut on the new SlimKitty blog hop on over and check her story out. 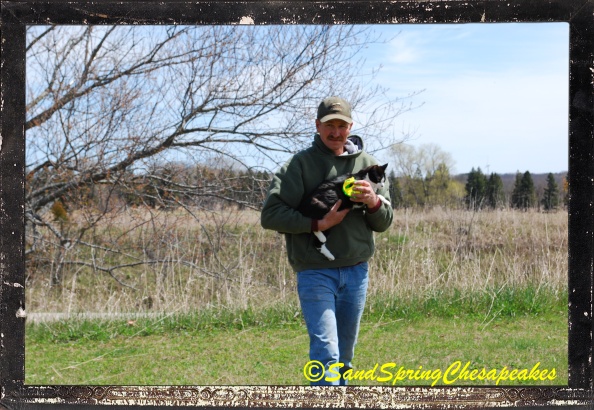 John taking MK back to the house.

The gang was outside and I was taking photos of them with some new treats that they got to try out for a review and of course MK couldn’t be left out she had to come photo bomb the pictures. Here John is taking MK and her toy back to the house. After I snapped this picture he said right away “you better delete that picture”. LOL nope! Evidence that he does love the cat. 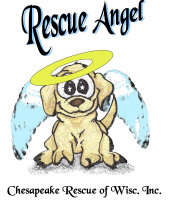 Did you see my new Rescue Angel picture on my sidebar. If you click on the picture it will take you to Chesapeake Retriever Rescue Of Wisconsin’s online cafepress store where a number of items are for sale with different pictures of the Sand Spring crew. A portion of the sales will go back to CRROW.

Stop back tomorrow and see what G & G did for their FitDog Friday this past week.