Today we are joining 2 Brown Dawgs for their This ‘N That Thursday’s blog hop!

This is what she has to say about the hop,

“This ‘N That Thursday is for anything you want!  Maybe you want to post about unrelated topics, or each topic isn’t quite long enough to make up a whole post, or you have awards to share, or you have one long post…anything goes!  So grab the button and join the hop!”

Saturday
I had a full weekend with Gambler and Glory this past weekend. Saturday we had our first AKC hunt test of the season. It was put on by the Fox Valley Retriever Club and was held at Bong State Park. If your in Wisconsin and are into outdoor activities Bong is a great place to do things. You can enjoy camping, hiking, horseback trails, get involved in rocket launching, upland training and hunt test training along with running competitions there.
Gambler and I were running seniors, John and Glory were running juniors. To run juniors Glory needed to do 2 single retrieves on land and if she passed land she got to move on to the water series. She passed her land so John and her moved onto water. She did 2 singles on water and passed her first junior hunter test of the season. She was such a good girl! You can tell by the picture how happy the both of them were!

Gambler and I on the other hand didn’t fair so well. I should said Gambler did great, I didn’t fair to well. Seniors consists of 2 land and water retrieves, a land and a water blind and one of the series has to have a honor in it. Other things can be done also like a diversion and a walk up. We started out with a land double with a honor. Gambler stepped on the second bird thrown, went on to retrieve the live flyer that was shot and he had a little bit of a hunt but stuck with it and found his bird. While he was out there hunting the judge commented on what a great hunt he was doing and that is the way it should be done. He then got to honor the next working dog. He sat there patiently and was excused after the working dog was released. He got called back to the next series. That series consisted of a land blind and a water blind. He ran the land blind first with lining the blind and didn’t need help from me to find it. He moved on to the water blind. I lined him up, released him, he ran around the bank and not straight into the water, I forgot I was in a test and not training and I called him back to me side and lined him up again and resent him. When at a test you don’t get to repeat or redo things. So I tried to finish the blind but he wan’t listing to my whistles so I called him in and I knew we were not passing. I was a nervous wreck so that didn’t help with my thinking. I can’t say it was a waste of time as anytime out at a test or training is a learning experience and I learned what I need not do next time.
Sunday
Sunday Glory and I had a dog show put on by the Fond Du Lac Kennel Club. It was held at the Fond Du Lac expo center. Glory was being shown in the Amateur owner-handler  group. She was the only dog in her class so she took First in that class. She went up against one other female for Winners Bitch. The other dog won Winners Bitch and Glory got the Reserve Winners ribbon. We had a good time and got practice in the ring and hopefully learned something for next time which will be in a week. Here are a couple pictures of Glory and I. 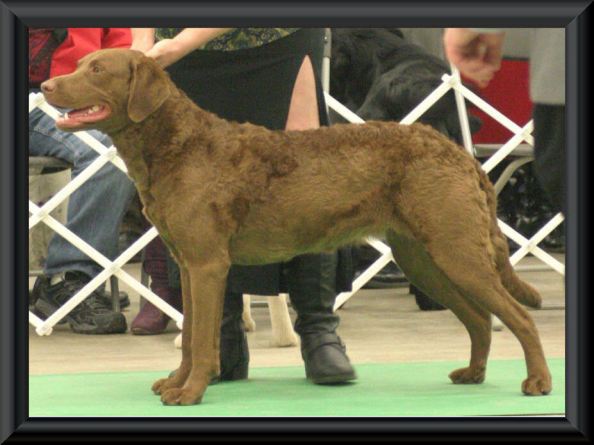 So that wraps it up for today, why don’t you hop on over to 2 Brown Dawgs see what their up to and grab the badge and join the hopping fun!