Thunders breeder gave me the information about early neurological stimulation so I could do it with Glory’s litter. I will be honest and never knew about this or done any of this with Nellie’s litter. I would of course touch the puppies and play with them but I never followed a structured outline. The information below is taken from the article by Carmen L. Battaglia. You can read the full article here.

Newborn pups are uniquely different from adults in several respects. When born, their eyes are closed and their digestive system has a limited capacity requiring periodic stimulation by their dam who routinely licks them in order to promote digestion. At this age they are only able to smell, suck, and crawl. Body temperature is maintained by snuggling close to their mother or by crawling into piles with other littermates. During these first few weeks of immobility, researchers noted that these immature and under-developed canines are sensitive to a restricted class of stimuli which includes thermal and tactile stimulation, motion and locomotion.

Methods of Stimulation The U.S. Military in their canine program developed a method that still serves as a guide to what works. In an effort to improve the performance of dogs used for military purposes, a program called “Bio Sensor” was developed. Later, it became known to the public as the “Super Dog” Program. Based on years of research, the military learned that early neurological stimulation exercises could have important and lasting effects. Their studies confirmed that there are specific time periods early in life when neurological stimulation has optimum results. The first period involves a window of time that begins at the third day of life and lasts until the sixteenth day. It is believed that because this interval of time is a period of rapid neurological growth and development, and therefore is of great importance to the individual. The “Bio Sensor” program was also concerned with early neurological stimulation in order to give the dog a superior advantage. Its development utilized six exercises which were designed to stimulate the neurological system. Each workout involved handling puppies once each day. The workouts required handling them one at a time while performing a series of five exercises. Listed in order of preference, the handler starts with one pup and stimulates it using each of the five exercises. The handler completes the series from beginning to end before starting with the next pup. The handling of each pup once per day involves the following exercises: 1. Tactical stimulation (between toes) 2. Head held erect 3. Head pointed down 4. Supine position 5. Thermal stimulation.

Tactile stimulation – holding the pup in one hand, the handler gently stimulates (tickles) the pup between the toes on any one foot using a Q-tip. It is not necessary to see that the pup is feeling the tickle. Time of stimulation 3 – 5 seconds.

Head held erect – using both hands, the pup is held perpendicular to the ground, (straight up), so that its head is directly above its tail. This is an upwards position. Time of stimulation 3 – 5 seconds.

Head pointed down – holding the pup firmly with both hands the head is reversed and is pointed downward so that it is pointing towards the ground. Time of stimulation 3 – 5 seconds.

Supine position – hold the pup so that its back is resting in the palm of both hands with its muzzle facing the ceiling. The pup while on its back is allowed to sleep. Time of stimulation 3-5 seconds.

Thermal stimulation—use a damp towel that has been cooled in a refrigerator for at least five minutes. Place the pup on the towel, feet down. Do not restrain it from moving. Time of stimulation 3-5 seconds.

Five benefits have been observed in canines that were exposed to the Bio Sensor stimulation exercises. The benefits noted were: 1. Improved cardio vascular performance (heart rate) 2. Stronger heart beats, 3. Stronger adrenal glands, 4. More tolerance to stress, and 5. Greater resistance to disease. In tests of learning, stimulated pups were found to be more active and were more exploratory than their non- stimulated littermates over which they were dominant in competitive situations. Secondary effects were also noted regarding test performance. In simple problem solving tests using detours in a maze, the non-stimulated pups became extremely aroused, whined a great deal, and made many errors. Their stimulated littermates were less disturbed or upset by test conditions and when comparisons were made, the stimulated littermates were more calm in the test environment, made fewer errors and gave only an occasional distress sound when stressed.

Breeders can now take advantage of the information available to improve and enhance performance. Generally, genetics account for about 35% of the performance, but the remaining 65% (management, training, nutrition) can make the difference. In the management category, it has been shown that breeders should be guided by the rule that it is generally considered prudent to guard against under and over stimulation. Short of ignoring pups during their first two months of life, a conservative approach would be to expose them to children, people, toys and other animals on a regular basis. Handling and touching all parts of their anatomy is also a necessary part of their learning which can be started as early as the third day of life. Pups that are handled early and on a regular basis generally do not become hand-shy as adults. 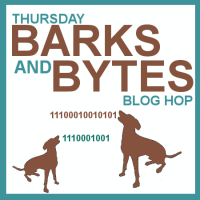 We are joining Linda at 2browndawgs and Jodi at Heart Like A Dog for this great blog hop.